Head On, by John Scalzi

Hilketa is a frenetic and violent pastime where players attack each other with swords and hammers. The main goal of the game: obtain your opponent’s head and carry it through the goalposts. With flesh and bone bodies, a sport like this would be impossible. But all the players are “threeps,” robot-like bodies controlled by people with Haden’s Syndrome, so anything goes. No one gets hurt, but the brutality is real and the crowds love it. Until a star athlete drops dead on the playing field. Is it an accident or murder? FBI Agents and Haden-related crime investigators, Chris Shane and Leslie Vann, are called in to uncover the truth—and in doing so travel to the darker side of the fast-growing sport of Hilketa, where fortunes are made or lost, and where players and owners do whatever it takes to win, on and off the field.

It’s a relief to know that people are who you think they are. People often end up disappointed when they meet their heroes or people that they admire. Over Memorial Day weekend, I had the opportunity to be on a panel with John Scalzi while we were both at Phoenix Comic Fest. I was relieved that Scalzi is as intelligent and perceptive in person as he is with his writing. (I may have even gushed a little about Old Man’s War.)

I think Head On is a better story than Lock In. Since we already knew so much of the world from Lock In, Head On felt like returning to a comfortable series where we knew what to expect. Scalzi continued to play by his rules and we cringed each time a threep was destroyed.

Whereas Lock In leaned more toward sci-fi action/adventure, Head On felt more like a sci-fi mystery. I was on the edge of my seat as they’re wont to say, and I wasn’t sure whodunit until the end of the story. I also appreciated Scalzi’s subtle commentary on professional sports and reality television.

Four stars is my rating. I hope that there is enough interest for Scalzi to keep writing the life and times of Chris Shane and the intriguing world in which he and his colleagues inhabit. I for one would be a ready reader to future installments. 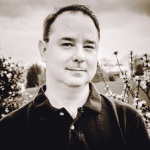 John Scalzi is an American science fiction author and former president of the Science Fiction and Fantasy Writers of America. He is best known for his Old Man’s War series, three novels of which have been nominated for the Hugo Award, and for his blog Whatever, where he has written on a number of topics since 1998. He won the Hugo Award for Best Fan Writer in 2008 based predominantly on that blog, which he has also used for several charity drives. His novel Redshirts won the 2013 Hugo Award for Best Novel. He has written non-fiction books and columns on diverse topics such as finance, video games, films, astronomy, writing and politics, and served as a creative consultant for the TV series Stargate Universe.

Mark Gardner lives in northern Arizona with his wife, three children and a pair of spoiled dogs. Mark holds a degrees in Computer Systems and Applications and Applied Human Behavior. END_OF_DOCUMENT_TOKEN_TO_BE_REPLACED
This entry was posted on Tuesday, May 29th, 2018 at 07:17 and tagged with #scifi, book reviews and posted in Reviews & Interviews. You can follow any responses to this entry through the RSS 2.0 feed.
« 2018 Phoenix Comic Fest
Kill the Farm Boy, by Delilah S. Dawson & Kevin Hearne »