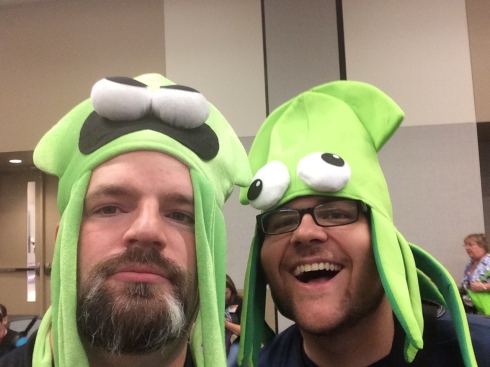 I had this bizarre dream last night. I dreamt that fellow Arizonian author, Sam Sykes and I were chillin’ in the back of a limo, talking shop and dumpin’ on authors we know. We must’ve been cruisin’ in a big metro like Phoenix, or Pittsburgh, because there were mass transit busses like everywhere. EVERYWHERE. They were blockin’ traffic, just a wall of white steel. I suspect they were actually PA Transit busses, but I digress. So Sam and I decided “F this,” and we grab our bicycles out of the limo’s trunk, taking to the streets.

Here’s the thing: Every time we stopped at a traffic signal, Sam would lean down and let a little air out of my tires. I know, right? Totally within Sam’s modus operandi. Anyway, my tires are getting softer and softer, and each act of sabotage is accompanied by a shit-eatin’ grin.

So we get to where we’re going, and apparently that destination is my deceased great-grand mother’s summer cabin off of some lake in Michagan. We start rummaging through cardboard boxes that are stacked around like an episode of Hoarders, and taking out photos and crap.

This goes on until we hear someone outside flying a drone around the neighborhood. Where did the lake go? It’s Wes Chu standing on a cinderblock wall like the one that surrounds my back yard here in Dewey. Wes starts pelting us with something, but I wake up before that something is identified.

Dreams are fuckin’ weird. Oh, and don’t bike around town with Sam Sykes, he’s a menace.

Mark Gardner lives in northern Arizona with his wife, three children and a pair of spoiled dogs. Mark holds a degrees in Computer Systems and Applications and Applied Human Behavior. END_OF_DOCUMENT_TOKEN_TO_BE_REPLACED
This entry was posted on Wednesday, September 16th, 2015 at 14:29 and posted in Uncategorized. You can follow any responses to this entry through the RSS 2.0 feed.
« A Stellar Affair, by Laurel Richards
Dexter is Dead, by Jeff Lindsay »