I saw part five yesterday at Jules Smith’s site. Miss Alister is maintaining a project page on her blog. Regular readers of this blog know I love collaborative writing, and I’m so glad this project is still kicking. Photos of the original stream-of-conciousness typewritten pages as well as my writing space are after the jump. I think this continuation is somewhere around the 480-word mark:

I reached into my pocket to retrieve the golden coin. I suspected it was to do something. I could’ve drank more of the cloudy nectar, but I wanted to maintain a clear head.

James stared across the table, picking at an unseen flaw in the glass. He looked to be waiting for a response to his tale. Slowly, I pulled the coin from the recess of my pocket. James nodded as I rubbed it between my thumb and forefinger. I lay it on the table, expecting the bust of a younger James to look off to the right.

I inhaled deeply, staring at the coin, its glowing contrast against the dark, wet grain of the wood. The bust I saw was no longer of James, but of myself. I recognized the tufts of hair that failed to be contained behind my ears. People had told me I had a strong nose, but looking at my profile, I suspected I had broken it once too many.

I leaned forward too, not wanting to miss anything he had to say.

“Remember that little swim you took a few years ago?”

“I remember you didn’t stop me.”

James leaned back and crossed his arms. “You had a lesson to learn.” He drained the amber from his glass. “You just had to die to learn it.”

“I just told you about my oldest friend. His death was like your death…” His voice trailed off and he regarded the empty glass.

“There are no crocodiles in the open water,” I insisted.

James let out a laugh and the room seemed to brighten, if only for a second. “Not the croc, lad, the water.”

I opened my mouth to respond, but I found I had nothing to say.

“I thought you had figured it out.” James turned the glass up-side-down. “You had that wonderful idea about the waterfall.”

I didn’t respond, so he continued. “You drowned that day you went for a swim. I told you then, and I’ll tell you now: You can’t rush ready. You weren’t ready then,” James stood. “But now…”

I pushed my glass away from me. I stared at the old coot, but deep down, I had to admit I knew there was something special going on. Something beyond life and death. “Tell me,” I squeaked. I cleared my throat, reached for the glass and finished its contents. “Tell me about the Ultimate Invincibility,” I said between coughs.

James again roared with laughter. “Nothing to tell, boy. You’re living it.”

I played with the edge of the coin that suddenly beared my likeness.

“Put that in your pocket,” he said. “We’ll make the boat ready.”

I shoved the coin in my pocket, wondering what James was going on about.

“At daybreak, we set sail for the Gate of Gods.”

Chapter 7 – The Acceptance, by Miss Alister 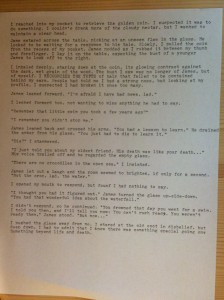 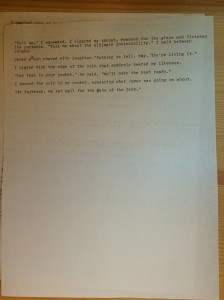 Mark Gardner lives in northern Arizona with his wife, three children and a pair of spoiled dogs. Mark holds a degrees in Computer Systems and Applications and Applied Human Behavior. END_OF_DOCUMENT_TOKEN_TO_BE_REPLACED
This entry was posted on Tuesday, January 13th, 2015 at 18:00 and posted in fiction. You can follow any responses to this entry through the RSS 2.0 feed.
« 16Sunsets – Secrets
16Sunsets – Acquisitions »